Curious about Cryptolepis sanguinolenta herbal extract? Check out these resources from our site or scroll down to find answers to common questions. If you have more questions, reach out! 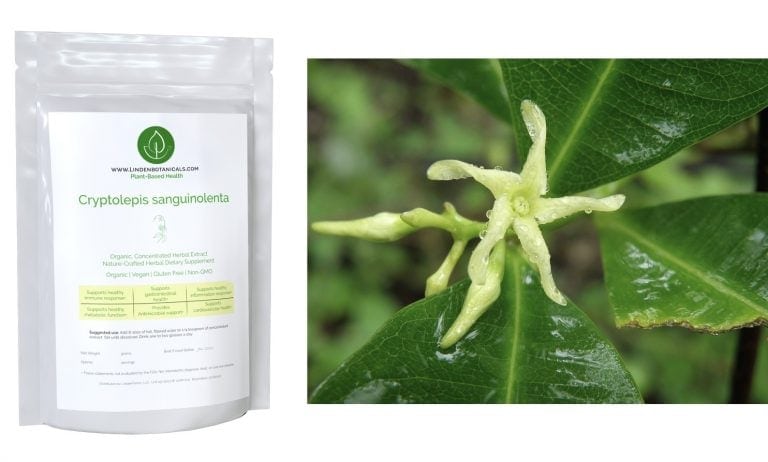 Do you sell Cryptolepis sanguinolenta?

Yes! You can order it as an extract from our online store.

What other names does Cryptolepis go by?

Why is Cryptolepis known for?

Cryptolepis benefits include supporting the immune system against a wide range of diseases, including malaria, Lyme disease, and bacterial infections.

What is its potential for Lyme disease support and Bartonella henselae support?

Cryptolepis extract has shown potential antibacterial activity against a broad spectrum of bacteria including Borrelia burgdorferi, which causes Lyme disease. In fact, it may be used as a herbal support during the treatment of tick-borne infections such as Lyme Borrelia burgdorferi and Bartonella henselae. The presence of bioactive compounds such as cryptolepine, the main alkaloid in the herb, has shown effective activity against both Gram-positive and Gram-negative bacteria. Another study reveals that the bioactive compounds may degrade DNA in Borrelia burgdorferi.

Cryptolepis may have an important supportive role in the need to develop novel treatment strategies against persister microcolonies of Borrelia burgdorferi. A 2020 study in Frontiers in Medicine involved the testing of a panel of botanical and natural products commonly used by Lyme disease patients. The scientists found Cryptolepis sanguinolenta to be highly active in vitro against both growing Borrelia burgdorferi and non-growing stationary phase Borrelia burgdorferi.

What are its cytotoxic properties?

What are its cardiovascular and anti-atherosclerosis properties?

Cardiovascular conditions are among the leading causes of death globally. In 2016, more than 15.21 million people died of a stroke and heart attack.  Cryptolepis may reduce cholesterol levels by lowering low-density lipoproteins (LDL) and increasing the absorption of high-density lipoproteins. The herb may also help lower blood cholesterol and plasma lipids and inhibit platelet accumulation.

What are its anti-diabetic properties?

Type 2 diabetes, commonly referred to as diabetes mellitus, is a global concern with significant mortalities. It also results in other conditions such as nephropathy, neuropathy, retinopathy, and macrovascular disorders. The World Health Organization predicts that the number of diabetic patients will rise to 300 million by 2025. Cryptolepis sanguinolenta contains bioactive compounds that produce potent antidiabetic activities (e.g., insulin secretagogue activity, removing insulin from the pancreas, and increasing plasma insulin concentration). The herb has proven to be able to multi-target and has shown to be effective in helping to control diabetes.

What anti-malarial support does it provide?

For years, malaria has remained a global pandemic with an estimated 3.3 billion people at risk globally. While several antimalarial drugs have helped in achieving the 90% malarial eradication rate, hundreds of thousands of deaths are still being reported around the world.

Cryptolepis sanguinolenta has proved to contain anti-parasitic activities against Plasmodium falciparum, a parasite that causes malaria. Cryptolepine exhibits high gametocytocidal properties that contribute to the herb’s potent antimalarial activity. The alkaloids interfere with the parasite’s lifecycle at both the asexual and sexual stages. Scientists suggest that a combination of amodiaquine and cryptolepine could be an effective combination to help achieve a 100% malaria eradication rate.

What phytochemicals are in Cryptolepis?

What are the plant’s traditional uses?

How do I consume Cryptolepis extract?

Instructions: Add 1/4 teaspoon of concentrate to 8 ounces of water or a cup of juice. Stir until dissolved. Drink 1-2 glasses a day.

How did you choose your Cryptolepis supplier?

What if I have more questions about Cryptolepis?